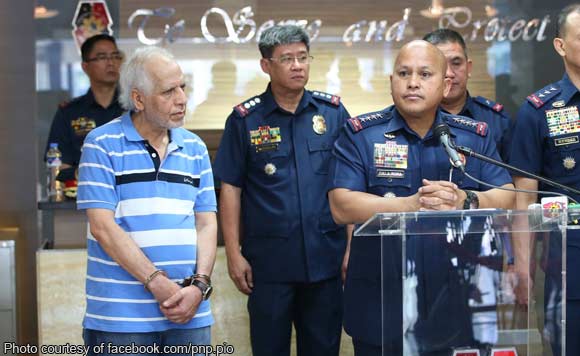 Taha Mohamed Al-Jabouri, 64, was nabbed during operations in Pampanga. He arrived in Manila from Istanbul, Turkey on Aug. 27, 2017.

The suspect’s presence in the country was reported to Philippine authorities by the Iraqi Embassy in Manila.

“The Iraqi Embassy described Al-Jabouri as a chemist with knowledge on explosives and is known to have close ties with militant extremist movements like Hamas in the Middle East,” he added.

“On Saturday night, January 20, an information was received thru our Barangay Information Network (BIN) of the presence of a suspicious-looking person with Middle Eastern features, fitting the description and photographs provided by the Iraqi Embassy, in Barangay Malabanias, Angeles City, Pampanga,” the PNP chief stressed.

“When asked of his personal circumstances, he readily presented his Iraqi passport No. A6120599 identifying himself as Taha Mohamed Al-Jabouri,” Dela Rosa said.

“A closer inspection of his luggage yielded assorted personal effects and different denominations of foreign currency,” the PNP chief added.

During questioning, Al-Jabouri revealed that he served as a consultant for Hamas in Damascus, Syria and moved to Istanbul, Turkey sometime in 2012.

He added that he traveled to Manila to meet a Chinese business group that hired him as a consultant.

“The PNP-IG is coordinating closely with the Bureau of Immigration and the Iraqi Embassy for further disposition of Mr. Al-Jabouri. (PNA)

Politiko would love to hear your views on this...
Spread the love
Tags: Bureau of Immigration, Chief Supt. Norberto D. Solomon, Director General Ronald "Bato" Dela Rosa, Iraqi, Iraqi Embassy, Istanbul, Pampanga, Philippine National Police, PNP Intelligence Group, Taha Mohamed Al-Jabouri, Turkey
Disclaimer:
The comments posted on this site do not necessarily represent or reflect the views of management and owner of POLITICS.com.ph. We reserve the right to exclude comments that we deem to be inconsistent with our editorial standards.