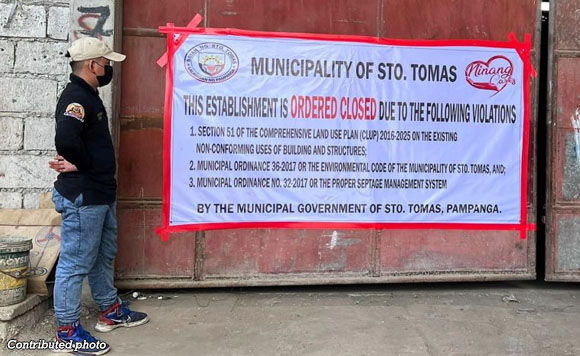 The mayor of Sto. Tomas town in Pampanga province has ordered the closure of a plastic recycling facility for violating local environmental laws.

The orders were dated March 15, according to a Punto Central Luzon report.

In her order, Ronquillo said residents manifested through a signature campaign to her office a complaint against the facility for emitting foul smell prompting her to direct the municipality’s internal monitoring team to conduct an inspection of the facility in February.

The team found the company in various violations of municipal ordinances on environmental protection, notably: non-conformity to the Comprehensive Land Use Plan 2016-2025; the absence of environment clearance certificate in the company’s site preparation, construction, and operation of waste management facilities; offensive odor resulting from the discharge of air contaminants; absence of proper septage management system; and the dumping of septage and untreated wastewater into canals, drainages and creeks.

The closure order was served by a joint inspection team composed of several offices, including the business permits and licensing office, municipal health office, and municipal environment and natural resources office.

Politiko would love to hear your views on this...
Spread the love
Tags: Mayor Gloria Ronquillo, Pampanga, plastics, recycling, Sto. Tomas
Disclaimer:
The comments posted on this site do not necessarily represent or reflect the views of management and owner of POLITICS.com.ph. We reserve the right to exclude comments that we deem to be inconsistent with our editorial standards.