Pinedas of Pampanga show up at inter-basketball league for support 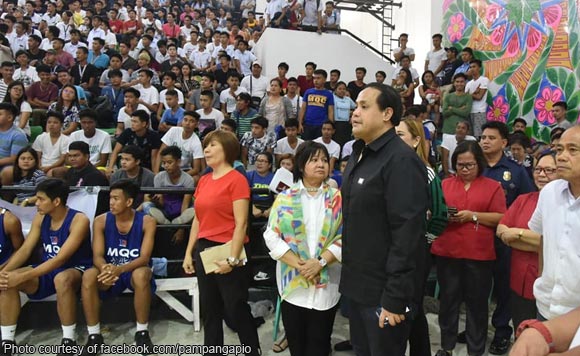 Pampanga Governor Lilia Pineda and his son, Vice Governor Dennis “Delta” Pineda, expressed support to the province’s basketball league among colleges and universities by showing up at its finals on Monday.

The top two politikos of the province graced the championship game between the Mary the Queen College and Don Honorio Ventura Technological State University with their presence.

Other officials from the provincial board, as well as of the different departments at the capitol, and Minalin Mayor Edgar Flores watched the game as well.

The game was won by Mary the Queen College, and the school’s Cyrus Antiza was hailed as the Most Valuable Player.

Photos posted on the Pampanga PIO’s Facebook page show Vice Gov. Pineda leading the giving of awards after the game.

Politiko would love to hear your views on this...
Spread the love
Tags: Cyrus Antiza, Don Honorio Ventura Technological State University, Governor Lilia Pineda, Mayor Edgar Flores, Minalin, Most Valuable Player, Queen College, Vice Governor Dennis "Delta" Pineda
Disclaimer:
The comments posted on this site do not necessarily represent or reflect the views of management and owner of POLITICS.com.ph. We reserve the right to exclude comments that we deem to be inconsistent with our editorial standards.