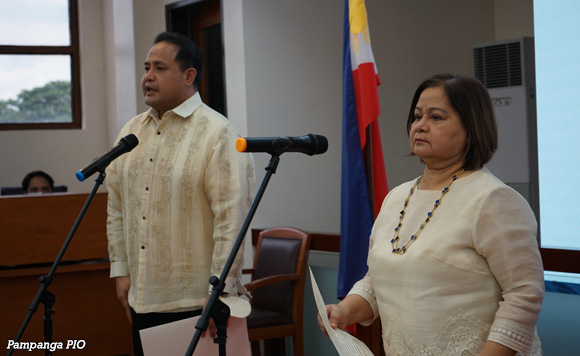 “I believe that my mother laid the foundation of a government that values the poor more. Mom is the example I follow,” he was quoted as saying in a Sun Star Pampanga report.

“With your trust in my leadership, I promise to bring the Capitol closer to the barangays,” Pineda said.

During his oath-taking, the governor revealed his 10-point agenda for his fresh term.

He said he will move to strengthen people’s ability to recover from disasters.

“We will continue to support senior citizens, PWDs, solo parents, indigenous people as well as coastal barangays. We will expand our food aid,” Pineda said.

Politiko would love to hear your views on this...
Spread the love
Tags: Dennis Pineda, oath, Vice Governor Lilia Pineda
Disclaimer:
The comments posted on this site do not necessarily represent or reflect the views of management and owner of POLITICS.com.ph. We reserve the right to exclude comments that we deem to be inconsistent with our editorial standards.