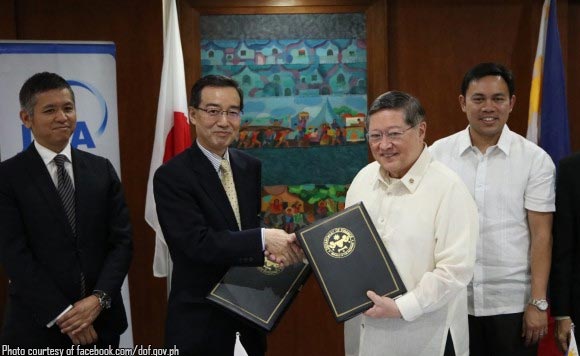 Bulacan is the newest beneficiary of the economic partnership between the Philippines and Japan.

The two countries signed a P4.57 billion loan deal for the expansion of a road in the province.

“The government of the Philippines and Japan signed on Wednesday, February 28, the 9.399-billion yen loan agreement for the construction of the 3rd phase of the Arterial Road Bypass Project,” the Department of Finance (DOF) announced in a statement.

According to DOF, the improvement of the Arterial Road Bypass, also known as the Plaridel Bypass Road, aims to ease traffic congestion in Bulacan and support economic growth in the rural areas.

Finance Secretary Carlos Dominguez III signed the agreement on behalf of the Philippines, while Susumu Ito, the chief representative of the Japan International Cooperation Agency (JICA), signed on behalf of Japan.

“This is, in a word, an economically worthwhile investment. It symbolizes the economic calculation, immediacy of impact, and long-term multiplier effects that we wish to see in all the Build, Build, Build projects,” Dominguez said.

“We are grateful for the generosity of the Japanese people through JICA and the Japanese government as well as the strong support you have extended to us at this key juncture in our own economic emergence,” he added.