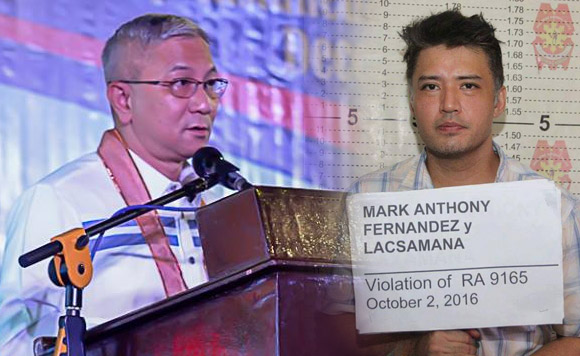 Former regional director of the Philippine National Police (PNP) in Central Luzon and now director general of the Philippine Drug Enforcement Agency (PDEA), Aaron Aquino, on Wednesday expressed surprise over the acquittal of TV and movie actor Mark Anthony Fernandez, who was charged with marijuana possession in Pampanga.

“I am personally surprised by the acquittal of Mr. Mark Anthony Fernandez, who during my time as regional director of PNP-Region 3, was apprehended for possession of 1 kilo of marijuana,” Aquino said in a statement.

Police in Angeles, Pampanga collared Fernandez in October last year for allegedly transporting the marijuana, with an estimated street value of P15,000.

Judge Ireneo Pangilinan Jr. of the Angeles City Regional Trial Court Branch 58 said he had to release Fernandez due to “procedural breaches” committed by Angeles policemen in handling the evidence against the actor.

The actor is the son of actress and politician Alma Moreno and the late actor Rudy Fernandez. (PNA)

Politiko would love to hear your views on this...
Post Views: 2
Spread the love
Tags: Aaron Aquino, marijuana, Mark Anthony Fernanadez, Pampanga, PDEA, Philippine Drug Enforcement Agency, Philippine National Police (PNP)
Disclaimer:
The comments posted on this site do not necessarily represent or reflect the views of management and owner of POLITICS.com.ph. We reserve the right to exclude comments that we deem to be inconsistent with our editorial standards.