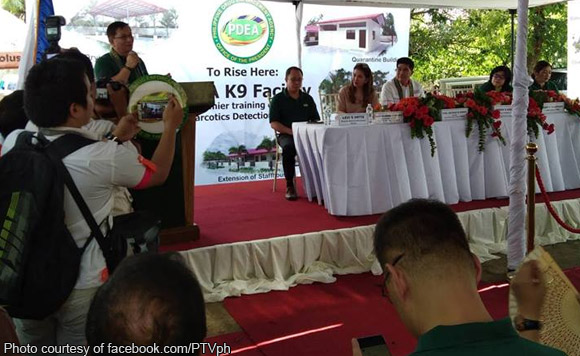 The facility will be located in the 5,000-square meter lot where the agency has its existing training facility for Narcotic Detection Dogs (NDDs), PDEA Director General Aaron N. Aquino said.

”We shall be rehabilitating our existing NDD training facility through the construction of the bathing and drying areas for NDDs, covered cages, covered court, extension of staff house for K9 handlers and employees, kitchen with mess hall, and a quarantine building,” he said.

Aquino said the rehabilitation of the K9 facility will be a big boost to PDEA’s anti-drug operations, especially in the detection of concealed illegal drugs where the NDDs have been extensively used.

He said that PDEA is in the process of acquiring 100 additional NDDs, the largest in the history of the agency.

Currently, PDEA has a total of 72 NDDs, 34 of them are being utilized in anti-drug operations by the Regional Offices across the country, 13 were deployed to Regional Office National Capital Region (RO- NCR) in their Seaport Interdiction Units, Bureau of Corrections, four are being prepared for breeding, and 21 are for adoption.

With the improvement of the existing training facility, the PDEA chief said they are envisioning to make the facility the premier Narcotic Detection Dog training canter in the country that will serve as the training hub for all NDDs used by other law enforcement agencies nationwide.

It could house the 100 NDDs which the agency will be acquiring, in addition to the 72 in-house dogs, to bolster the monitoring and interdiction capabilities in the airports and seaports throughout the country.

The new NDDs and newly-hired K9 handlers will be deployed in seaports and airports nationwide, he said.

Politiko would love to hear your views on this...
Spread the love
Tags: Bulacan, Narcotic Detection Dogs, PDEA Director General Aaron N. Aquino, Philippine Drug Enforcement Agency, San Jose del Monte City
Disclaimer:
The comments posted on this site do not necessarily represent or reflect the views of management and owner of POLITICS.com.ph. We reserve the right to exclude comments that we deem to be inconsistent with our editorial standards.