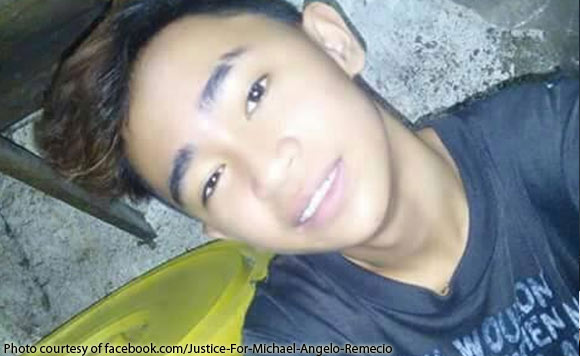 The Public Attorney’s Office (PAO) confirmed through an autopsy that the decaying body of a 16-year-old boy found in a sack in San Jose del Monte, Bulacan on Wednesday is that of Michael Angelo Remecio.

The body was found around 3:20 p.m. in a stream at Evergreen Subdivision, Barangay Gaya-Gaya in SJDM by residents who noticed a foul smell around the area.

Parents of the victim, Michael Angelo Remecio, possibly identified their son as they recognized the clothes he wore when he left their house at Barangay 176 on Aug. 25, according to reports.

The victim’s mother, Genevie, told the media that her son left that day to earn some money by driving a tricycle.

But Remecio failed to come home, so his family filed a missing person report on Sept. 1.

According to the police, the body may have possibly been dumped in Caloocan and carried by the current to Bulacan.

Remecio’s corpse was found exactly a week after the body of 14-year-old Reynaldo de Guzman was found in Nueva Ecija.

Politiko would love to hear your views on this...
Post Views: 0
Spread the love
Tags: Bulacan, Michael Angelo Remecio, Public Attorney's Office, Reynaldo de Guzman, San Jose Del Monte
Disclaimer:
The comments posted on this site do not necessarily represent or reflect the views of management and owner of POLITICS.com.ph. We reserve the right to exclude comments that we deem to be inconsistent with our editorial standards.