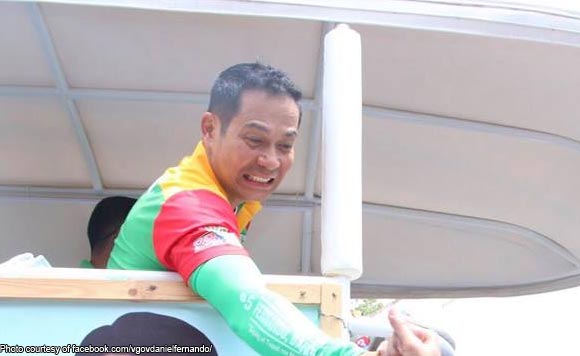 Movie actor and incumbent Vice Governor Daniel Fernando is on his way to becoming the new provincial chief executive of this province.

Based on the partial tally and unofficial election results as of 12:53 p.m. on Tuesday, Fernando, of the National Unity Party (NUP), garnered a total of 696,164 votes against his two rivals, incumbent Malolos City Mayor Christian Natividad of the PDP-Laban and former councilor Teddy Natividad of Lakas-NUCD, who got 400,493 and 157,014 votes, respectively.

Fernando will replace incumbent Governor Wilhelmino Sy-Alvarado, who also took a remarkable lead against his lone opponent for the vice gubernatorial race.

Both Fernando and Alvarado have served three terms in their respective posts and decided to switch positions.

Despite the apparent victory of the two provincial officials, they cannot be proclaimed yet pending the transmission of results from the towns of Hagonoy, Baliwag, Balagtas, Marilao, and Plaridel, and City of San Jose del Monte.

Incumbent Meycauayan City Mayor Henry Villarica, on the other hand, will serve as the new fourth district representative. (PNA)

Politiko would love to hear your views on this...
Tags: Anjo Mendoza, councilor Teddy Natividad, Governor Wilhelmino Sy-Alvarado, Malolos City, Mayor Christian Natividad, National Unity Party, Vice Governor Daniel Fernando
Disclaimer:
The comments posted on this site do not necessarily represent or reflect the views of management and owner of POLITICS.com.ph. We reserve the right to exclude comments that we deem to be inconsistent with our editorial standards.