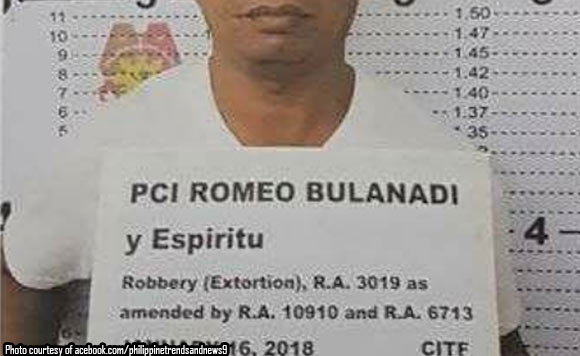 A town chief in Pampanga province was arrested for receiving protection money from the operator of a “peryahan”.

Bulanadi’s arrest came a day after six policemen from the Carranglaan Municipal Police Station in Nueva Ecija were arrested for mulcting money from businessmen.

“This series of counter-intelligence operations against our PNP personnel shows our efforts in removing bad eggs in the police force and that the rule of law does not distinguish rank, position or popularity whether victim or respondent in the PNP organization. This is a clear manifestation of our keen determination to remove misfits among the ranks of our organization,” Corpuz said.

Bulanadi is now under the custody of the counter-intelligence task force for the filing of charges.

Last September, the Central Luzon regional police office also relieved the police chief of Magalang town in Pampanga after two of his men allegedly extorted money from the wife of a drug suspect they earlier arrested.

Politiko would love to hear your views on this...
Post Views: 4
Spread the love
Tags: “peryahan”, Carranglaan Municipal Police Station in Nueva Ecija, Central Luzon Police Office director, Chief Supt. Amador Copuz, Pampanga province, police chief, said Chief Insp. Romeo Bulanadi, Sasmuan
Disclaimer:
The comments posted on this site do not necessarily represent or reflect the views of management and owner of POLITICS.com.ph. We reserve the right to exclude comments that we deem to be inconsistent with our editorial standards.