Pampanga town declares state of calamity due to quake 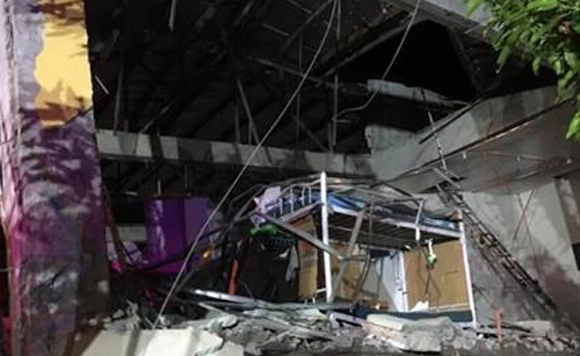 CITY OF SAN FERNANDO, Pampanga—The municipality of Porac in this province on Monday night declared a state of calamity following the fatalities and damages caused by the powerful earthquake that hit some parts of Luzon.

Porac Mayor Carling dela Cruz said Vice Mayor Dexter Albert David and members of the Sangguniang Bayan conducted an urgent session to declare the town under a state of calamity to enable the municipal government to utilize its calamity fund for assistance to affected residents.

Seven people died in Porac and two in Lubao town due to the earthquake.

Dela Cruz said they will provide burial and other assistance to the affected residents.

According to Porac rescue officer Omar Tolentino, there were four fatalities in the collapsed four-storey building which houses the Chuzon Supermarket in Porac.

Authorities confirmed that several people are still trapped inside the structure.

Politiko would love to hear your views on this...
Spread the love
Tags: Chuzon Supermarket, local government units (LGUs), Lubao town., Mayor Carling dela Cruz, Omar Tolentino, Porac, Sangguniang Bayan, Vice Mayor Dexter Albert David
Disclaimer:
The comments posted on this site do not necessarily represent or reflect the views of management and owner of POLITICS.com.ph. We reserve the right to exclude comments that we deem to be inconsistent with our editorial standards.