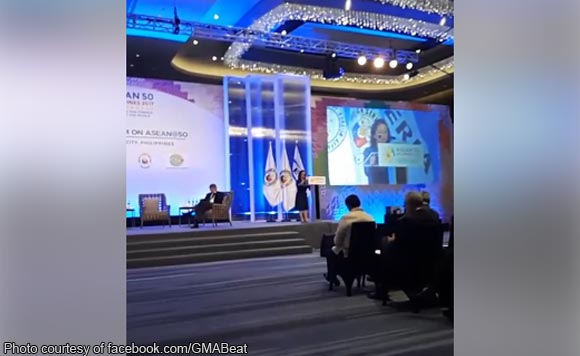 The High Level Forum aims to “bring the retrospectives and perspectives of Asean Leaders and officials, as well as eminent persons and the youth on the making, substance, significance, and future of Asean.”

With the theme “ASEAN: Partnering for Change, Engaging the World,” the one-day event was organized by the Department of Foreign Affairs (DFA), the Economic Research Institute for ASEAN and East Asia (Eria), and the Foreign Service Institute (FSI) of the Philippines.

The Forum is also the culmination of a series of public symposia that Eria has hosted in cooperation with various partners in several cities in the Philippines.

The previous forums focused on the three pillars of Asean: the Asean Political-Security Community, the Asean Economic Community, and the Asean Socio-Cultural Community.

The Philippines leads the commemmoration of Asean’s 50th anniversary this year as the curent Asean chair.

Politiko would love to hear your views on this...
Post Views: 0
Spread the love
Tags: ASEAN, Asean Political-Security Community, Conrad Manila, Department of Foreign Affairs, Economic Research Institute for ASEAN and East Asia, Foreign Service Institute, former Philippine President Gloria Macapagal Arroyo, former Prime Minister Abhisit Vejjajiva, Kingdom of Thailand
Disclaimer:
The comments posted on this site do not necessarily represent or reflect the views of management and owner of POLITICS.com.ph. We reserve the right to exclude comments that we deem to be inconsistent with our editorial standards.