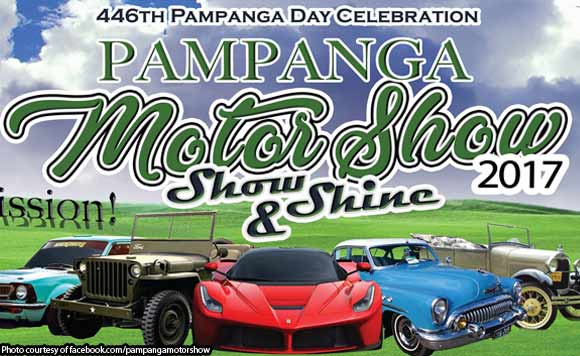 The provincial government of Pampanga will hold a “show and shine” car show this year, in a bid to promote the province’s motor industry among tourists and visitors.

The Pampanga Motor Show, which will be held at Pradera Verde in Lubao, Pampanga on December 9, will fall under the celebration of Aldo ning Capampangan 2017.

Noel Castro, event coordinator, described how the show will be different from others before it.

“This will be an outdoor event, unlike those in Manila and other parts of the country, where they are held indoors. This was patterned after the show and shine car show of the United States and Canada,’’ Castro said. “This is open to all car enthusiasts and car club members who will come and set up their own tent and maybe have their picnic and fellowship there.”

Around 125 participants are expected to join the motor show.

Politiko would love to hear your views on this...
Post Views: 1
Spread the love
Tags: Capampangan 2017, Lubao, provincial government of Pampanga
Disclaimer:
The comments posted on this site do not necessarily represent or reflect the views of management and owner of POLITICS.com.ph. We reserve the right to exclude comments that we deem to be inconsistent with our editorial standards.