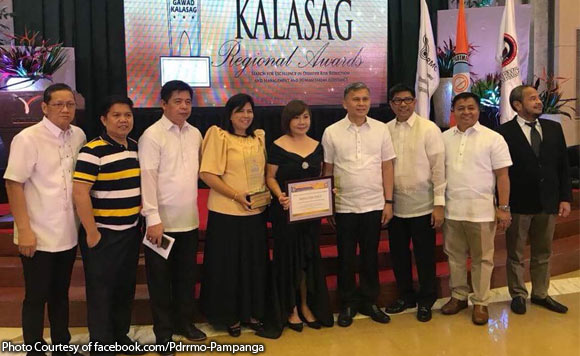 Pampanga PDRMM Office said this was the fifth consecutive year that the province received such an award.

The Pampanga PDRRMC is currently vying for the top place at the Gawad Kalasag National Level for 2018.

“This prestigious recognition is a testament of the effort and dedication of the council members and the effective leadership of the Governor (Lilia Pineda) and Vice Governor– all to attain our vision of a disaster resilient Pampanga,” said Pampanga PDRRMO.

Politiko would love to hear your views on this...
Spread the love
Tags: 20th Regional Gawad Kalasag Awarding ceremony, Best PDRRMC Award, Board Member Ananias L. Canlas Jr., Civil Defense Region 3, Clark, Fontana Leisure Park, Golden Pavilion Hall, Pampanga, Pampanga Provincial Disaster Risk Reduction and Management Council (PDRRMC), Third District
Disclaimer:
The comments posted on this site do not necessarily represent or reflect the views of management and owner of POLITICS.com.ph. We reserve the right to exclude comments that we deem to be inconsistent with our editorial standards.