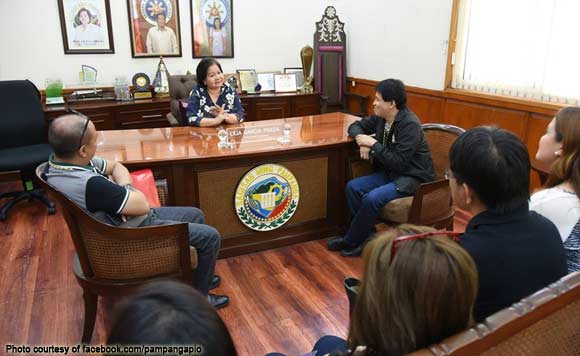 Local government leaders in the province of Pampanga recently formed an alliance that aims to create a collaborative development plan for Kapampangans.

Pampanga Governor Lilia Pineda and all city and town mayors engaged in the alliance-building project of the Department of Interior and Local Government (DILG)-Pampanga, headed by Director Myrvi Apostol-Fabia.

During the meeting, Pineda led the ceremonial turn-over of the LGUs’ list of projects for provincial funding support. She also vowed to help in outsourcing for financial subsidy,

“Pagtutulung-tulungan natin ang mga projects ninyo. I am also thankful to the DILG that these were presented, as we [provincial government and Congresswoman Gloria Macapagal-Arroyo] were really looking for the list of projects needed by the LGUs for implementation and funding support. Thank you and congratulations to DILG for making this happen,” said Pineda.

Politiko would love to hear your views on this...
Tags: DILG, Director Myrvi Apostol-Fabia, Local Development Council Participatory Project Prioritization, Pampanga Governor Lilia Pineda, province of Pampanga, Provincial Alliance Building
Disclaimer:
The comments posted on this site do not necessarily represent or reflect the views of management and owner of POLITICS.com.ph. We reserve the right to exclude comments that we deem to be inconsistent with our editorial standards.