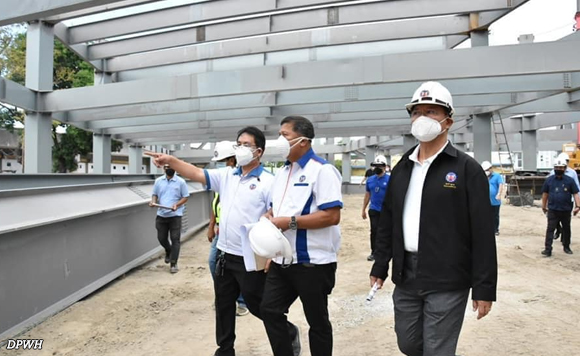 Last Friday, the Cabinet official made a visit to Pampanga, particularly to the cities of San Fernando and Angeles, to inspect the ongoing projects of the DPWH.

Mercado checked the progress of the the ongoing construction of the Angeles-Magalang Bypass Road project, Cutcut Flyover in Angeles City, and the new offices inside the DPWH-Central Luzon compound in the City of San Fernabdo.

He said the ongoing construction of the DPWH-Central Luzon Alternate Site Building was very important and timely in case of future disasters.

He said the building would serve as an alternative command center should an earthquake such as the “Big One” strike Metro Manila.

“God forbid it happens but just in case, we know we are ready,” Mercado said.

“Mayroon tayo agad opisina outside of Metro Manila para masiguro na seamless ang ating operation because DPWH has a very important role when it comes to disaster management, rehabilitation and sometimes rescue of lives, too,” he said.

Politiko would love to hear your views on this...
Spread the love
Tags: DPWH, Roger Mercado
Disclaimer:
The comments posted on this site do not necessarily represent or reflect the views of management and owner of POLITICS.com.ph. We reserve the right to exclude comments that we deem to be inconsistent with our editorial standards.