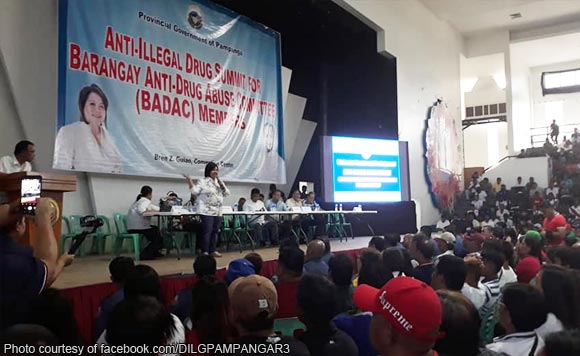 Members of the Barangay Anti-Drug Abuse Councils (BADAC) all over Pampanga province held Friday a summit at the Bren Guiao Convention Center in San Fernando City.

Governor Lilia Pineda presided over the gathering that drew more than 4,000 BADAC members, according to the provincial office of the Department of Interior and Local Government.

The DILG Pampanga said the anti-illegal drugs summit was held for the BADAC across the province to “come together in pursuit of a stronger and a head-on war against the use of illegal drugs.”

During the program, DILG provincial chief Myrvi Fabia presented the results of the 2017 BADAC Functionality Assessment.

SSupt. Jean Fajardo of the Philippine National Police, and Glenn Guillermo of the Philippine Drug Enforcement Agency Region 3 also made their respective presentations, focusing on the functions and duties of the BADAC and the status of drug-clearing operations in the province.(END)

Politiko would love to hear your views on this...
Spread the love
Tags: Barangay Anti-Drug Abuse Councils, Bren Guiao Convention Center, Department of Interior and Local Government), Governor Lilia Pineda, Pampanga province, San Fernando City, SSupt. Jean Fajardo
Disclaimer:
The comments posted on this site do not necessarily represent or reflect the views of management and owner of POLITICS.com.ph. We reserve the right to exclude comments that we deem to be inconsistent with our editorial standards.