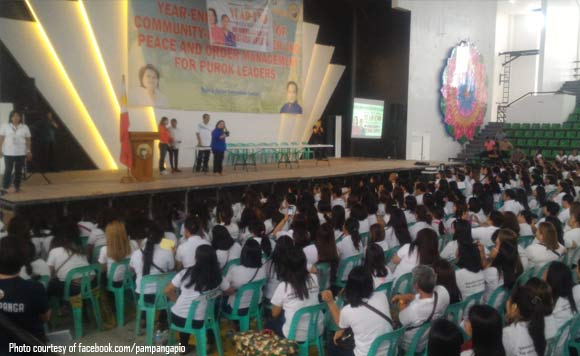 Gov. Lilia Pineda led the distribution of P6.9 million worth of subsidy to 658 DCWs held at the Bren Z. Guiao Convention Center.in the city of San Fernando.

During the event, the board members lauded the efforts of daycare workers whom they considered as unsung heroes.

“Never end your commitment to the children of Pampanga. With your effort, dedication and commitment, we’ll develop future leaders in the province and the country,” they said.

The subsidy was given in recognition of the sacrifices made by barangay daycare workers in shaping the minds of young Kapampangans.

Pineda also believes that he subsidy will be a big help in alleviating the living condition of daycare workers.

According to Provincial Social Welfare and Development Officer Elizabeth Baybayan, the DCWs received P10,500 each for their services from June to December of this year.

Politiko would love to hear your views on this...
Spread the love
Tags: Bren Z. Guiao Convention Center, Cherry Manalo, Daycare workers (DCW), food packs, Fritzie David-Dizon, Gov. Lilia Pineda, Kapampangans, Pampanga, Provincial Social Welfare and Development Officer Elizabeth Baybayan, Rosve Henson, San Fernando
Disclaimer:
The comments posted on this site do not necessarily represent or reflect the views of management and owner of POLITICS.com.ph. We reserve the right to exclude comments that we deem to be inconsistent with our editorial standards.