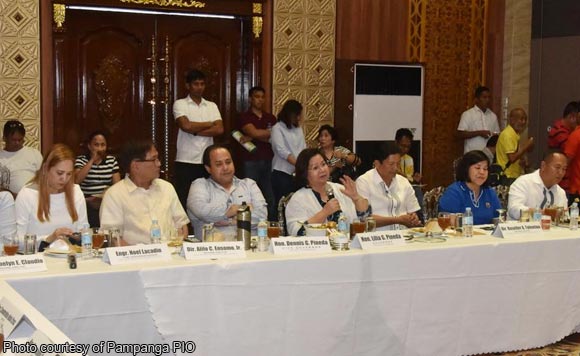 Officers from the Mines and Geosciences Bureau, Department of Environment and Natural Resources, National Housing Authority, and the Department of Public Works and Highways were also in attendance.

Quarry operators in Pampanga were present as well at the meeting held at Kingsborough International Convention Center in San Fernando City.

Facilitated by the provincial environment office, the meeting centered on the suspension of quarry operations in eight regions across the country, including Central Luzon.

The Mines and Geosciences Bureau said that the suspension takes effect for 15 days pending the conduct of safety and geohazard assessment of surrounding communities.(END)

Politiko would love to hear your views on this...
Spread the love
Tags: Arayat, Department of Environment and Natural Resources, Floridablanca towns, Magalang, national housing authority, Pampanga Governor Lilia Pineda, Porac, Vice Governor Dennis Pineda
Disclaimer:
The comments posted on this site do not necessarily represent or reflect the views of management and owner of POLITICS.com.ph. We reserve the right to exclude comments that we deem to be inconsistent with our editorial standards.