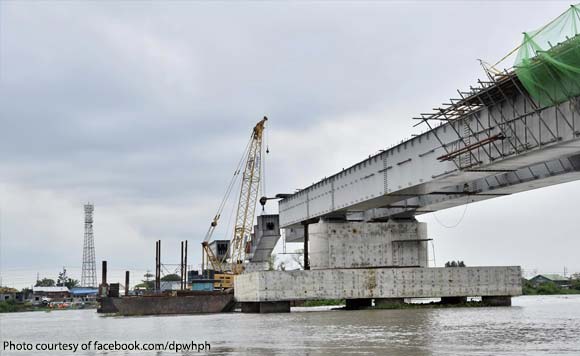 The Pampanga Delta Bridge project is already 88 percent complete, according to the Department of Public Works and Highways (DPWH).

The project is seen to give residents and traders from the left bank portion of the Pampanga River in Masantol town easier access to the Poblacion area, officials said.

According to a Sun Star Pampanga report, construction of the 270-meter bridge is under the DPWH Bridges Construction Replacement Program (BCRP) 2.

In the report, Sadain said the bridge will spur economic growth in the towns of Masantol and Macabebe in Pampanga, and Calumpit, Hagonoy and Malolos City in Bulacan.

The infrastructure spans the Pampanga River, connecting Barangay Balibago and Bebe Anac in Masantol town. Once completed, the bridge will provide better connectivity to the towns of Macabebe and Masantol.

Politiko would love to hear your views on this...
Spread the love
Tags: DPWH, Pampanga Delta Bridge, Poblacion area
Disclaimer:
The comments posted on this site do not necessarily represent or reflect the views of management and owner of POLITICS.com.ph. We reserve the right to exclude comments that we deem to be inconsistent with our editorial standards.