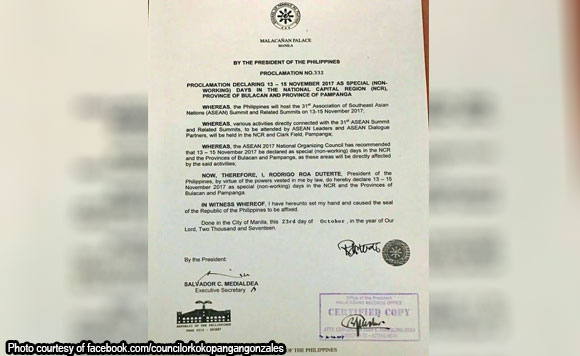 The Malacañang on Monday announced Nov. 13-15 as special nonworking days in the National Capital Region (NCR) and the provinces of Bulacan and Pampanga, as the Philippines hosts the 31st Association of Southeast Asian Nations (Asean) Summit this year.

The National Organizing Committee recommended the suspension of work and classes in NCR and the two provinces as they will be directly affected by the activities.

Proclamation No. 322, signed by President Rodrigo Duterte and Executive Secretary Salvador Medialdea, automatically includes the suspension of classes in all levels, both public and private during the said dates.

Clark Field in Angeles City, Pampanga will serve as venue for the 31st ASEAN Summit and Related Meetings, the Special Celebration of Asean’s 50th anniversary with the leaders on Nov. 10-14.

The ongoing 11th Asean Defense Ministers Meeting, led by the Philippine Department of National Defense, has also chosen Clark as its venue.