P9M worth of fake cigarettes seized in Limay, three arrested 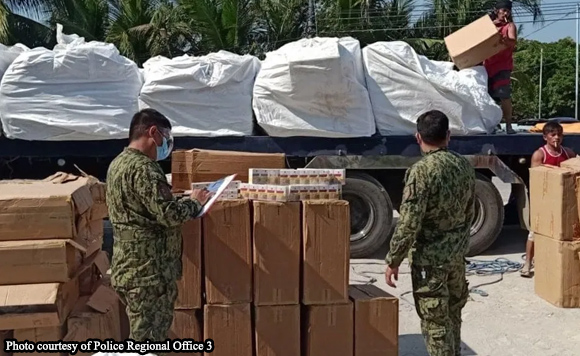 A truck containing hundreds of boxes of fake cigarettes worth P9 million was apprehended by authorities in Limay town in Bataan last Wednesday.

According to an ABS-CBN report, the illegal shipment was intercepted at a checkpoint manned by the 2nd Provincial Mobile Force Company and the Limay Municipal Police Station along Roman Highway, Barangay Alangan.

Some 460 master cases of Marvels, D&B, Mithy and Tomon cigarettes were found inside the truck, the report said.

Three persons aboard the truck were arrested by authorities after they failed to present proper documents for the shipment, the report added.

Politiko would love to hear your views on this...
Post Views: 22
Spread the love
Tags: Bataan ., fake cigarettes, Limay
Disclaimer:
The comments posted on this site do not necessarily represent or reflect the views of management and owner of POLITICS.com.ph. We reserve the right to exclude comments that we deem to be inconsistent with our editorial standards.