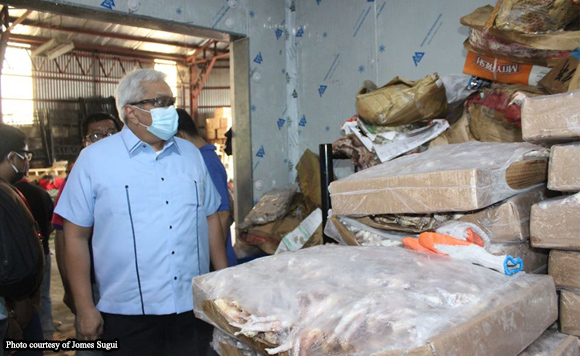 ANGELES CITY, Pampanga – The city government on Wednesday seized a huge volume of smuggled Peking duck and pork meat from a warehouse along Don Juico Avenue, Barangay Anunas here, with an estimated value of at least PHP8 million.

Mayor Carmelo Lazatin Jr., who led the inspection, said appropriate charges would be filed against the warehouse owner and illegal importer of the meat that could fit into two container vans.

The city government also discovered that the meat dealer operated without the necessary business permits.

Executive Assistant IV Reina Manuel, officer-in-charge of the City Meat Inspection Division (CMID), said the meat dealer would be charged for violation of Republic Acts 9296 and 10536, the Meat Inspection Code of the Philippines.

Lazatin immediately ordered the burying of the confiscated meat at the materials recovery facility (MRF) in Barangay Pampang here after a report said the items were already contaminated.

He assured his constituents that continuous inspection of meat shops will be conducted for their safety.

Lazatin also reminded Angeleños to stay vigilant and not be afraid to report illegal sellers of contaminated or double dead meat.

“Help me to clean our city from people who know nothing but to abuse and take advantage of others,” he added. (PNA)

Politiko would love to hear your views on this...
Spread the love
Tags: Angeles City, Barangay Anunas, City Meat Inspection Division, Don Juico Avenue, Executive Assistant IV Reina Manuel, Materials Recovery Facility, Mayor Carmelo Lazatin Jr., Pampanga
Disclaimer:
The comments posted on this site do not necessarily represent or reflect the views of management and owner of POLITICS.com.ph. We reserve the right to exclude comments that we deem to be inconsistent with our editorial standards.