P48M worth of fake cigs seized in Port of Subic – BOC 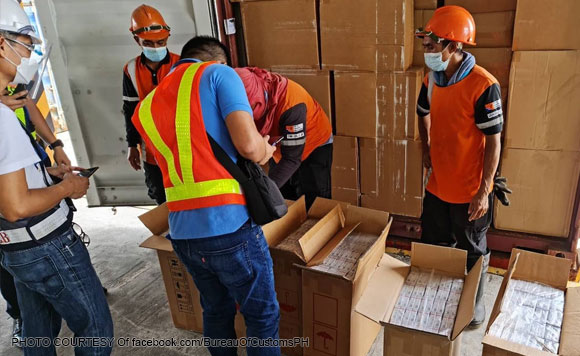 Fake cigarettes amounting to P48 million were seized by customs operatives at the Port of Subic on Friday, according to the Bureau of Customs.

In a statement, Port of Subic district collector Maritess Martin said a pre-lodgment control order was issued on the shipment suspected to have originated from Cambodia and consigned to a certain Shemala International Commercial Equipment Wholesaling to subject it to 100 percent physical examination.

Martin immediately issued a warrant of seizure and detention against the shipment for the possible violations of several laws.

The BOC official warned smugglers attempting unscrupulous activities in the port that they would be made to :face the full force of the law.”

“The Port of Subic remains steadfast in its continuing campaign against smuggling as part of the directive of BOC Ccmmissioner Rey Leonardo B. Guerrero to secure the nation’s borders,” Martin said.

Politiko would love to hear your views on this...
Spread the love
Tags: Bureau of Customs, fake cigarettes, Maritess Martin
Disclaimer:
The comments posted on this site do not necessarily represent or reflect the views of management and owner of POLITICS.com.ph. We reserve the right to exclude comments that we deem to be inconsistent with our editorial standards.