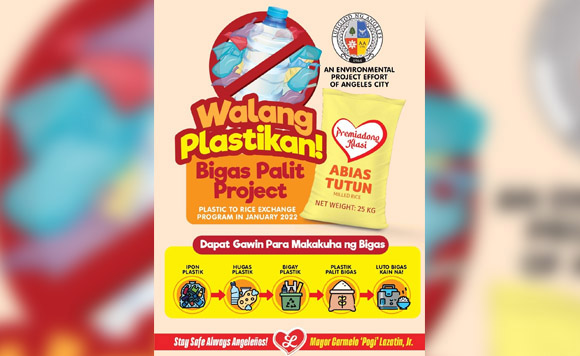 The Angeles City government will set aside P100 million for its “plastic to rice exchange program” in January next year, according to Angeles City Mayor Carmelo Lazatin, Jr.

The mayor said the program is intended to encourage households in the city to practice waste segregation at source, in their own homes, as well as to reduce if not eliminate the use of plastics.

“While we are persuading our kababayans to segregate waste into its classifications – biodegradable, non-biodegradable, recyclable, and plastic – there is something waiting for their hard work – a reward of rice,” Lazatin said in a statement.

Officials said P100 million out of the P204-million budget allotted yearly for waste segregation management will be used to purchase rice and equipment needed for the upcoming project.

That includes a designated storage area and redemption trucks roaming around the 33 barangays daily that will serve as the barter station. The collected plastics will then be sold to companies recycling plastic for hollow blocks and cement.

Politiko would love to hear your views on this...
Spread the love
Tags: Angeles City government, Carmelo Lazatin Jr, plastic
Disclaimer:
The comments posted on this site do not necessarily represent or reflect the views of management and owner of POLITICS.com.ph. We reserve the right to exclude comments that we deem to be inconsistent with our editorial standards.