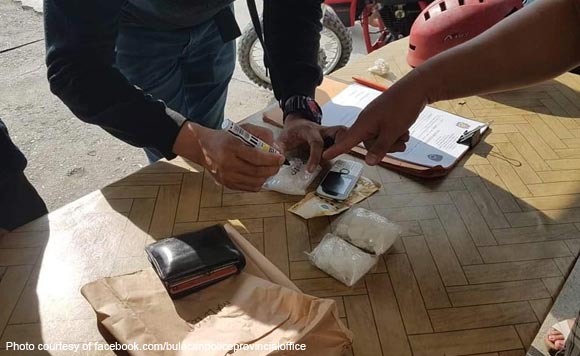 CAMP GENERAL ALEJO S. SANTOS, Bulacan – Some PHP1.8 million worth of shabu was confiscated from a drug suspect during a buy-bust operation in Barangay Tuktukan, Guiguinto, this province on Tuesday.

He said that based on the report submitted to him, an undercover policeman was able to buy a heat-sealed transparent plastic sachet containing shabu from the suspect that resulted in his arrest.

Cajipe said during the body search, three heat-sealed transparent plastic sachets containing shabu with an estimated weight of 147.630 grams and street value of P1.8 million were found from the suspect.

He said the suspect was brought to the town’s police station while the recovered pieces of evidence were brought to the Bulacan Provincial Crime Laboratory Office for examination.

Cajipe added that the suspect will be charged for violation of Republic Act 9165 or the Comprehensive Dangerous Drugs Act of 2002. (PNA)

Politiko would love to hear your views on this...
Spread the love
Tags: Barangay Tiaong, Barangay Tuktukan, Bulacan, Bulacan Provincial Crime, CAMP GENERAL ALEJO S. SANTOS, Col. Lawrence Cajipe, Guiguinto, Joerly Tisado
Disclaimer:
The comments posted on this site do not necessarily represent or reflect the views of management and owner of POLITICS.com.ph. We reserve the right to exclude comments that we deem to be inconsistent with our editorial standards.