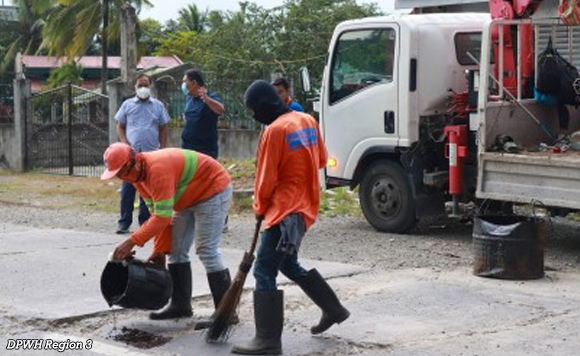 The Department of Public Works and Highways (DPWH) in Central Luzon is moving to repair dilapidated road sections in Nueva Ecija caused by overloaded trucks passing through the province.

According to Armando Manabat, head of the DPWH-Nueva Ecija’s first district engineering office, the agency was implementing palliative measures to reduce the worsening of the road condition caused by overloaded trucks passing through the roads.

Manabat said he inspected the reported defects in various parts of the Cabanatuan City-Carmen and Sta Rosa-Tarlac roads.

The two road sections serve as an alternative route for heavy trucks that exceed the 33-ton limit imposed by the North Luzon Expressway (NLEX) Corp. and are prohibited from passing through the Candaba Viaduct in Pampanga and the Sta Rosa Bridge in Nueva Ecija.

“The road networks under our jurisdiction have become diversion routes for trucks and this is based on the recommended rerouting scheme issued by NLEX,” Manabat said in a social media post.

“The reason why trucks from Paniqui, Tarlac going to Bulacan province, for example, are now plying this route thereby, damaging the road’s concrete pavement,” he added.

Politiko would love to hear your views on this...
Spread the love
Tags: DPWH, Nueva Ecija, Overloaded trucks
Disclaimer:
The comments posted on this site do not necessarily represent or reflect the views of management and owner of POLITICS.com.ph. We reserve the right to exclude comments that we deem to be inconsistent with our editorial standards.