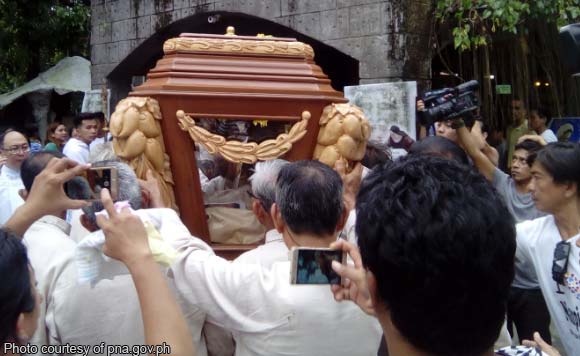 Thousands of Catholic faithfuls from this town and various places rejoiced in the enthronement of the Shroud of Turin, a replica of Jesus Christ burial veil, on Saturday afternoon.

Townsfolk in farm tractors, tricycles and some four-wheel vehicles to sport utility vehicles (SUVs) joined the two-kilometer parade from the Anao exit to the parish church.

Bishop Roberto Mallari who led the ceremonies and the holy mass, said in a prayer, the presence of the Shroud of Turin “will increase our devotion and our task to becoming a witness in living our faith bounded by your unconditional love and your unending blessings.”

“We hope that the Shroud of Turin can change our lives as well as increase our faith so we can respond with great joy in a much deeper expression,” Mallari said, saying that a continuous look to the veil should remind faithfuls of Jesus’ pains and transform leaders to servants.

This should result to unity among people in diversity, the bishop said.

Parish priest Christian Magtalas said the enthronement of the Shroud of Turin in their church comes in perfection with the parish being the Sanctuary of the Holy Face of Jesus, the handkerchief-dized cloth used by the risen Christ.

“The two veils perfectly matched and it was saw that the two veils are owned by one person and it’s Jesus Christ,” Magtalas said.

Lorna Mae Vero, Nueva Ecija tourism officer, said the provincial government would develop the one-hectare land in front of the Church to cater pilgrims which started to flock here since the enthronement of the Holy Face a couple of years ago.

According to church catechism, the Shroud of Turin is a centuries old linen cloth which bears the image of a crucified man, believed to be Jesus of Nazareth. It came to light in Turin the Middle Ages where it is now kept, although rarely shown because of its fragility.

It has been the subject of great devotion and also of intense scientific study.

The image, showing the marks of Jesus’ crucifixion, does not appear to have been painted, but has been miraculously imprinted into the cloth, the catechism showed.

Politiko would love to hear your views on this...
Post Views: 2
Spread the love
Tags: Ana, Catholic, Lorna Mae Vero, replica of Jesus Christ burial veil, sport utility vehicles, Townsfolk
Disclaimer:
The comments posted on this site do not necessarily represent or reflect the views of management and owner of POLITICS.com.ph. We reserve the right to exclude comments that we deem to be inconsistent with our editorial standards.