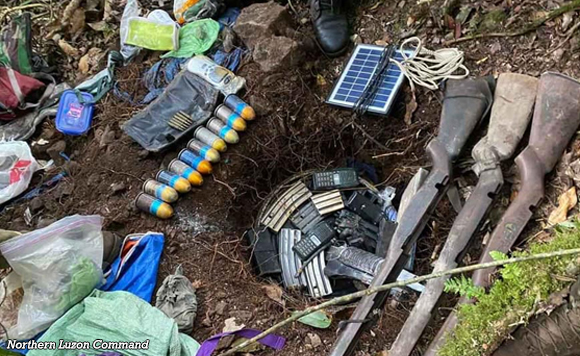 Maj. Gen. Andrew Costelo, acting commander of the Northern Luzon Command (Nolcom), said the troops were conducting peace and security efforts when a concerned resident of Barangay Minuli tipped off the location of the arms cache of the NPA, the armed wing of the Communist Party of the Philippines (CPP).

Col. Joseph Norwin Pasamonte, commander of the 703rd Infantry Brigade, whose area covers the province of Nueva Ecija, said the recovered items were brought to headquarters of the 84th Infantry Battalion in San Jose City, Nueva Ecija for proper documentation and disposition.

“Nolcom will be relentless on its peace, security, and development efforts to end the local communist armed conflict in the northern Luzon,” he said.

Politiko would love to hear your views on this...
Spread the love
Tags: 84th Infantry Battalion, arms cache, New People’s Army, Nueva Ecija, Philippine National Police (PNP)
Disclaimer:
The comments posted on this site do not necessarily represent or reflect the views of management and owner of POLITICS.com.ph. We reserve the right to exclude comments that we deem to be inconsistent with our editorial standards.