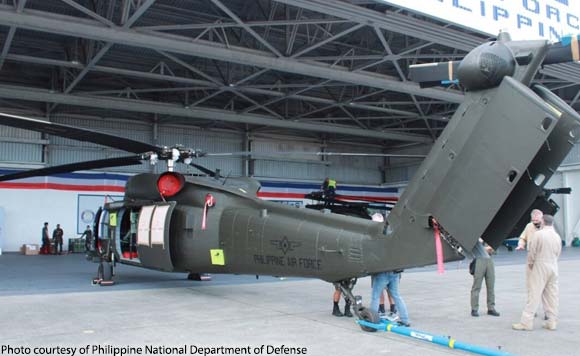 Rescuers did not find any survivors after a newly-acquired S-70i Black Hawk utility helicopter crashed in Capas town in Tarlac province after midnight on Thursday.

The chopper was carrying three pilots and three crew members, according to the Philippine Air Force.

“So far, no survivors have been found. The identities of the aircrew members will be provided as soon as the members of their families are properly notified. We grieve for the loss,” PAF said in a statement.

A PAF spokesperson said the Black Hawk of the 205th Tactical Helicopter Wing was on a night flight training when the accident occurred.

The crash occurred a few kilometers from the Colonel Ernesto Rabina Air Base, according to PAF.

Politiko would love to hear your views on this...
Spread the love
Tags: Black Hawk, Capas, PAF
Disclaimer:
The comments posted on this site do not necessarily represent or reflect the views of management and owner of POLITICS.com.ph. We reserve the right to exclude comments that we deem to be inconsistent with our editorial standards.