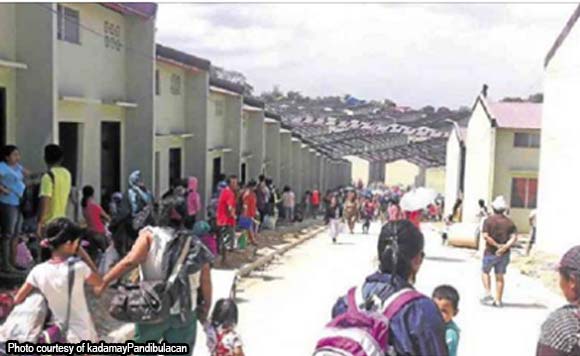 The National Housing Authority is set to redistribute around 2,000 units of houses originally intended for police and soldiers in Pandi, Bulacan, to the urban poor, including members of Kadamay.

According to NHA, 480 beneficiaries from the Bureau of Jail Management and Penology and 1,500 members of the Armed Forces of the Philippines (AFP) and the Philippine National Police (PNP) already waived ownership of the houses awarded to them.

Susan Nonato, an architect with the NHA and head of the AFP-PNP Housing Project, said they are waiting for the approval of the resolution to redistribute the houses to the new beneficiaries.

The NHA then sought a joint resolution from Congress to reaward the houses to poor families.

The joint resolution provides “immediate awarding” of housing units to “other qualified beneficiaries.”

“It was already announced by [Congress] that the resolution will be released. There are already guidelines for implementation once the order is released,” Nonato said.

Politiko would love to hear your views on this...
Post Views: 35
Spread the love
Tags: AFP-PNP Housing Project, Armed Forces of the Philippines (AFP), Bulacan, Bureau of Jail Management and Penology, Congress, Kadamay, national housing authority, Pandi, Philippine National Police (PNP), president Rodrigo Duterte, Susan Nonato
Disclaimer:
The comments posted on this site do not necessarily represent or reflect the views of management and owner of POLITICS.com.ph. We reserve the right to exclude comments that we deem to be inconsistent with our editorial standards.