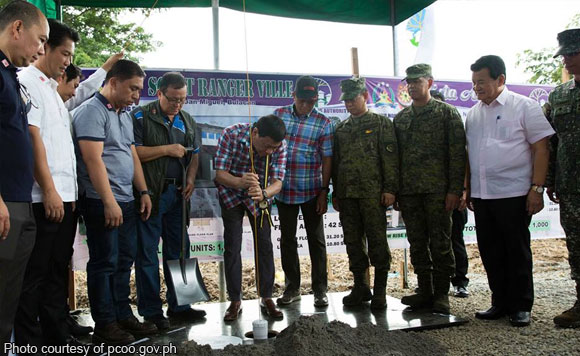 The National Housing Authority is planning to make a partial turnover next month of completed housing units for the Philippine Army Scout Rangers in Bulacan province, its head said Thursday.

“We hope to deliver next month. We will have a partial turnover of 300 of the 1,000 units that you promised to the Scout Rangers of the First Regiment in Bulacan,” Escalada said.

The project is the 10th housing site the NHA developed for personnel of the Armed Forces of the Philippines and the Philippine National Police under the Duterte administration.

It is being implemented in Barangays Calumpang and Tartaro-Sibul in San Miguel town.

“We’re very proud that the Duterte administration is having this big leap towards providing housing to the military officers,” Escalada said.

San Miguel is home to the First Scout Ranger Regiment, considered an elite unit of the Armed Forces of the Philippines.

Politiko would love to hear your views on this...
Spread the love
Tags: Armed Forces of the Philippines, Bulacan province, General Manager Marcelino Escalada Jr., national housing authority, Philippine National Police, San Miguel
Disclaimer:
The comments posted on this site do not necessarily represent or reflect the views of management and owner of POLITICS.com.ph. We reserve the right to exclude comments that we deem to be inconsistent with our editorial standards.