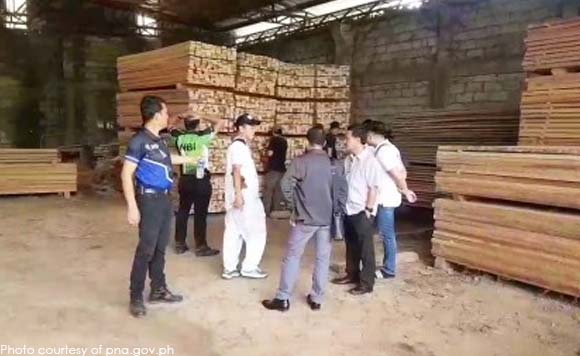 CITY OF MALOLOS, Bulacan — The National Bureau of Investigation (NBI) confiscated an estimated PHP5 million worth of illegally cut lumber in a warehouse in Barangay Tiaong, Guiguinto town, this province on Monday.

Czar Nuqui, chief of Environmental Crime NBI-Bulacan, said the raid was conducted after a search warrant was issued by the local court.

Nuqui said they received information that the contraband was stocked and being processed in the area.

“The contraband was discovered to have come from the Angat Watershed and Benguet province,” he said.

It was found out that the warehouse has no necessary permits to operate and is owned by a certain Ricky Yu.

Fernando Pitargue, supervising Science Research Specialist from the Forest Products Research and Development Institute (FPRDI) of the Department of Science and Technology, said the “hot” lumber were from the tree species of narra, mayapis, white lauan, sindalo, iktikan, kanili, and makaasim, all belonging to the Philippine Mahogany Group.

The owner of the hardware will face charges for violation of Presidential Decree 705 or the Revised Forestry Code. (PNA)

Politiko would love to hear your views on this...
Spread the love
Tags: Barangay Tiaong, Bulacan, chief of Environmental Crime NBI-Bulacan, City of Malolos, Czar Nuqui, Guiguinto town, National Bureau of Investigation (NBI)
Disclaimer:
The comments posted on this site do not necessarily represent or reflect the views of management and owner of POLITICS.com.ph. We reserve the right to exclude comments that we deem to be inconsistent with our editorial standards.