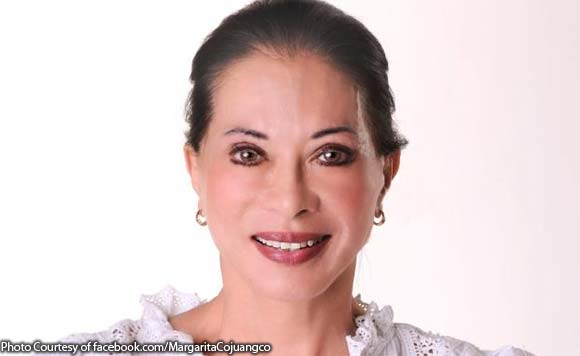 Former Tarlac governor Margarita “Tingting” Cojuangco no longer has qualms being seen with her boyfriend in public amid rumors that she has yet to reach a settlement with estranged husband, Jose “Peping” Cojuangco Jr.

According to society and business watcher Victor San Agustin, Cojuangco accompanied Finland’s honorary consul Ramon Ilusorio in his appearance at a Baguio court to testify in a civil case.

Ilusorio‘s romance with Tingting was said to have dated back to their college years, before she married Peping.

“Tingting, who dropped her usual white flowing dress in favor of a black frock, stayed in the courtroom until Ilusorio finished with his testimony, according to eyewitnesses,” San Agustin said.

The former Tarlac governor’s public appearance with her beau comes amid talk that she and Peping have retained their respective counsels since discussions about a possible settlement have bogged down.

San Agustin said Tingting “balked at Peping’s counter-proposal that he would agree to Tingting’s financial demand on condition that they both turn over the bulk of their conjugal assets to their five daughters.”

Tingting has already left her and Peping’s conjugal home in Dasmariñas Village, Makati since last year.

Politiko would love to hear your views on this...
Spread the love
Tags: Cojuangco, Jose “Peping” Cojuangco Jr., Margarita “Tingting” Cojuangco, Ramon Ilusorio, Tarlac, Victor San Agustin
Disclaimer:
The comments posted on this site do not necessarily represent or reflect the views of management and owner of POLITICS.com.ph. We reserve the right to exclude comments that we deem to be inconsistent with our editorial standards.