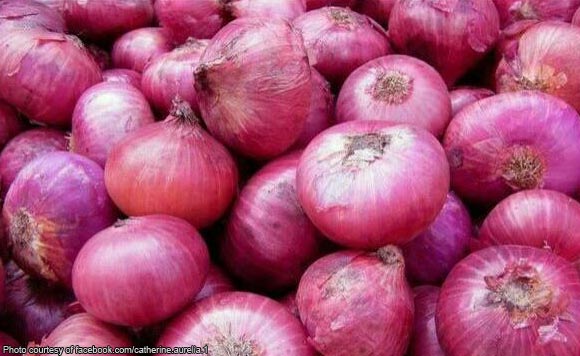 Nueva Ecija 1st District Representative Estrellita Suansing has asked the Department of Agriculture to suspend the issuance of import permits for red onions because of sufficient supply in the country.

The House of Representatives said in a statement Wednesday that Suansing issued the call during the deliberation on Tuesday night of the proposed P49.8 billion budget for the DA for 2019.

“I just would like to know how come we already imported red onions when we still have stocks with the onion farmers,” Suansing said.

Suansing took note of the claim of Bohol 3rd District Rep. Arthur Yap, who sponsored the proposed DA budget, that the estimated volume of red onions in the country after the arrival of the imported 3,839 metric tons as of Sept. 26, 2018 is 71,800 metric tons.

With an estimated monthly consumption of 14,550 metric tons and the current 3.8 months current supply as per onion farmers, Suansing said “we have 8.8 months of supply, which means that we will not plant onions anymore because the duration of the 8.8 months will last until June of next year.”

While he said that the DA is willing to suspend all unused import permits for red onions, Yap explained that the importation is triggered not by the inventory or stock, but by the breaching of prices set by the DA.

“The DA confirms that once the prices get settled at P65, they already started to cancel all those issued permits,” he added.

Yap said only 77 out of 1,436 approved import permits have so far been used.(END)

Politiko would love to hear your views on this...
Post Views: 1
Spread the love
Tags: Bohol (3rd District) Rep. Arthur Yap, Department of Agriculture, Nueva Ecija, Representative Estrellita Suansing
Disclaimer:
The comments posted on this site do not necessarily represent or reflect the views of management and owner of POLITICS.com.ph. We reserve the right to exclude comments that we deem to be inconsistent with our editorial standards.