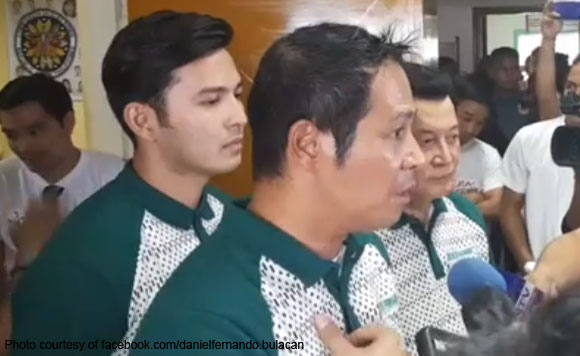 CITY OF MALOLOS, Bulacan — The top two incumbent officials in Bulacan have decided to switch their positions and filed their Certificates of Candidacy (COCs) at the Commission on Elections (Comelec) office in this city on Tuesday.

Vice Governor Daniel Fernando will seek the gubernatorial post while Governor Wilhelmino Sy-Alvarado will run for vice governor, both under the National Unity Party (NUP).

They are both in their third and last term in their respective positions.

“I promise to pursue all the good programs of Governor Alvarado, particularly the seven-point agenda of the provincial government of Bulacan,” Fernando said.

The filing of COC by the two provincial leaders apparently put an end to Bulakenyos’ confusion.

A couple of weeks ago, talks were rife that Alvarado would encourage his son, Rep. Jonathan Sy-Alvarado of the province’s First District and his, former Rep. Marivic Alvarado, to run for governor, contrary to his promise to Fernando that no one from the Alvarado family would face him in next year’s election. (PNA)

Politiko would love to hear your views on this...
Spread the love
Tags: Bulacan, certificates of candidacy, COCs, Comelec, Commission on Elections, Gov Sy-Alvarado, Governor Wilhelmino Sy-Alvarado, Malolos, Musical chairs, VG Fernando, Vice Governor Daniel Fernando
Disclaimer:
The comments posted on this site do not necessarily represent or reflect the views of management and owner of POLITICS.com.ph. We reserve the right to exclude comments that we deem to be inconsistent with our editorial standards.