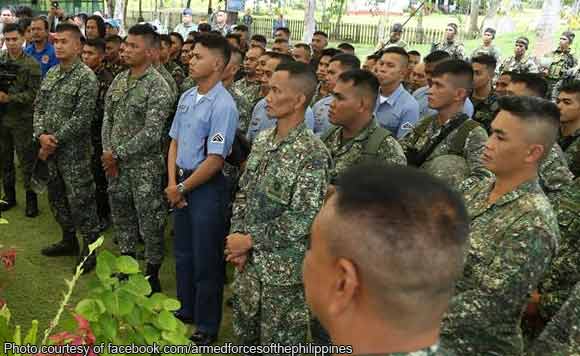 A massive recruitment of elected and appointed local government officials in this province to become members of the Philippine Army Reserve Force is now ongoing.

The move is part of the military’s aim to expand the list of Army reservists in this province considered as among the peaceful places in the Philippines and the safest province in Central Luzon.

Major Husain A. Esmael, director of Philippine Army’s 307th Community Defense Center, said that orientations are being conducted in the towns of Baler, Casiguran, Dinalungan, Dingalan and San Luis on how to be part of the Philippine Army’s Reserve Command.

Esmael said that he also asked local officials here to convince their constituents to enlist in the Reserve Force.

Likewise, he disclosed that Major Eleanor Marco Prado, new battalion commander of the Army’s 307th Community Defense Center, Aurora Ready Reserve Battalion, is planning to organize a company size of Disaster Risk Reduction and Management Teams (DRRMT) in every municipality in the province, in coordination with the Office of the Civil Defense and local chief executives.

Esmael noted that the ranks will be based on the length of service, educational attainments, eligibilities/board passers and accomplishments, among others.

He also explained that elected officials and presidential appointees who are reserve officers at the time of their election or appointment shall retain their existing rank but may apply for readjustment of rank.

An applicant must not be less than 21 years old or more than 64 years old at the time of appointment as reserve officer and must pass the physical examination conducted by an authorized hospital, a graduate of any baccalaureate degree and a board passer. Sixty-five years shall be considered the retirement age.

However, if qualified and fit for duty, a member of the retired reserve may be ordered to go on duty in times of local or national emergencies. (Philippine News Agency)

Politiko would love to hear your views on this...
Spread the love
Tags: Baler, Casiguran, Central Luzon, Dinalungan, Dingalan, Disaster Risk Reduction and Management Teams, Philippine Army Reserve Force, Philippine Army’s 307th Community Defense Center, Philippine Army’s Reserve Command, Philippines, San Luis
Disclaimer:
The comments posted on this site do not necessarily represent or reflect the views of management and owner of POLITICS.com.ph. We reserve the right to exclude comments that we deem to be inconsistent with our editorial standards.