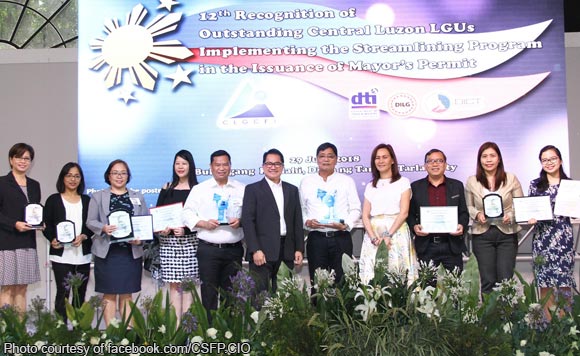 Mayor Edwin “EdSa” Santiago on San Fernando City, Pampanga has welcomed the award that the city recently received for being the most successful local government unit (LGU) in Central Luzon for streamlining business permits in 2017.

The Central Luzon Growth Corridor Foundation Incorporated (CLGCFI), in partnership with the Department of Trade and Industry, Department of Interior and Local Government, and Department of Information and Communications Technology, recently conferred to San Fernando City the 2017 Most Successful LGU in the Institutionalization of BPLS (Business Permitting and Licensing System) Reform in Region 3.

He said the award serves as an inspiration to do better in order to enhance and improve the business transactions in the city.

According to Tarlac City Governor and CLGCFI President Susan Yap, the awarding seeks to recognize and acknowledge deserving LGUs in Region 3, which have excellent implementation in the issuance of mayor’s permit that ease the doing of business in their respective LGUs.

San Fernando City also received plaques of recognition from the Cities and Municipalities Competitiveness Index for being the 4th Overall Competitiveness city in the Region 3. The city was ranked 2nd for Economic Dynamism, 6th for Resiliency, and 10th for Infrastructure.

Politiko would love to hear your views on this...
Spread the love
Tags: Central Luzon, Central Luzon Growth Corridor Foundation Incorporated (CLGCFI), Department of Information and Communications Technology, Department of Interior and Local Government), Department of Trade and Industry, Edwin "EdSa" Santiago, Pampanga, San Fernando City
Disclaimer:
The comments posted on this site do not necessarily represent or reflect the views of management and owner of POLITICS.com.ph. We reserve the right to exclude comments that we deem to be inconsistent with our editorial standards.