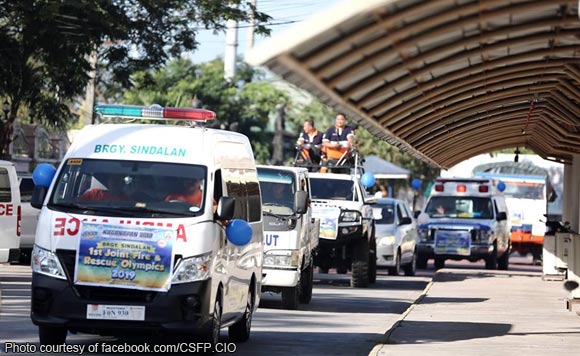 The event, which will showcase the different rescue and emergency response capabilities of various units, including those from the barangays, will be held on March 30.

A motorcade was held on Saturday morning from SM City Telabastagan up to the Heroes Hall to kick-off the activity, which forms part of the 18th Cityhood Anniversary celebrations, dubbed, “Kaganapan 2019.”

At the Heroes Hall, various Barangay Rescue Teams assembled for the launching.

Photos on the Facebook page of the city information office showed Santiago delivering some remarks.

According to the city information office, the olympics is initiated by the City Disaster Risk Reduction and Management Office, the Bureau of Fire Protection and the Department of Interior and Local Government.(END)

Politiko would love to hear your views on this...
Spread the love
Tags: Bureau of Fire Protection, Department of Interior and Local Government), Mayor Edwin Santiago, Pampanga, San Fernando City
Disclaimer:
The comments posted on this site do not necessarily represent or reflect the views of management and owner of POLITICS.com.ph. We reserve the right to exclude comments that we deem to be inconsistent with our editorial standards.