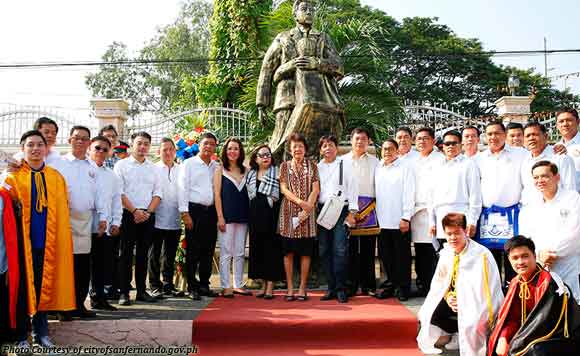 San Fernando City Mayor Edwin Santiago on Tuesday (May 2) led the commemoration of the 75th death anniversary of Jose Abad Santos, the 5th Chief Justice of the Supreme Court of the Philippines.

Abad Santos was executed on May 7, 1942 for refusing to swear allegiance to the Japanese Government during World War II.

The Pampanga politiko laid a wreath in front of the late Chief Justice’s monument at the Heroes Hall.

Santiago reminded the public of the martyrdom Abad Santos who was a San Fernando native.

“There is no one braver than a person who offered his life to save our country. People like Jose Abad Santos who fought for the freedom we enjoy today deserve to be recognized,” Santiago said.#
https://cityofsanfernando.gov.ph/forfernandinos/news

Politiko would love to hear your views on this...
Spread the love
Tags: 5th Chief Justice of the Supreme Court of the Philippines, 75th death anniversary, Japanese Government, Jose Abad Santos, Mayor Edwin Santiago, Pampanga politiko, San Fernando City, Supreme Court of the Philippines, World War II
Disclaimer:
The comments posted on this site do not necessarily represent or reflect the views of management and owner of POLITICS.com.ph. We reserve the right to exclude comments that we deem to be inconsistent with our editorial standards.