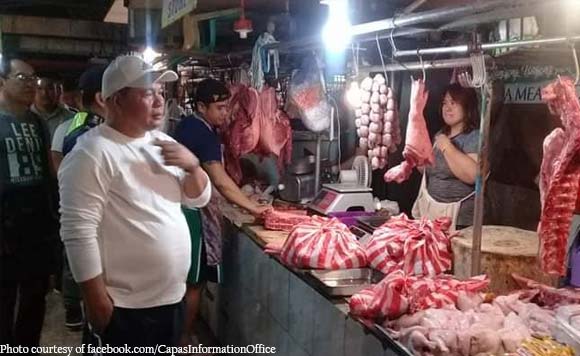 He may be the city’s top official but Capas Mayor Rey Catacutan is not at all picky where he goes, what he wears, and what he does for service.

He was recently spotted at the wet markets of Capas, Tarlac to personally inspect the frozen chunks of meat being sold to his constituents.

With his team beside him, he went through vendors and suppliers to check their certificates from the National Meat Inspection Commission or the Municipal Slaughter House. This is in response to the the threat of African Swine Fever that has recently been reported.

Despite his high profile, Mayor Rey was just in a white long-sleeved shirt and a white cap while making his rounds to the markets.

Politiko would love to hear your views on this...
Post Views: 3
Spread the love
Tags: Capas, Capas Mayor Rey Catacutan, National Meat Inspection Commission, Tarlac
Disclaimer:
The comments posted on this site do not necessarily represent or reflect the views of management and owner of POLITICS.com.ph. We reserve the right to exclude comments that we deem to be inconsistent with our editorial standards.