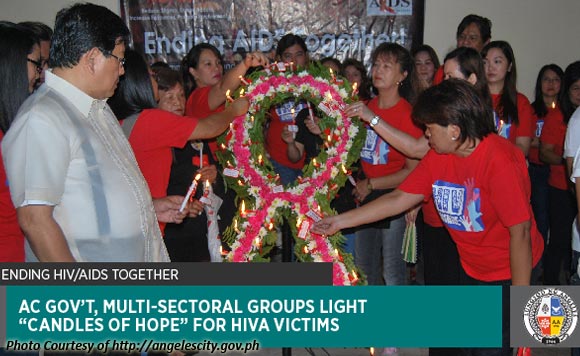 Angeles City Mayor Ed Pamintuan on May 22 led the city government in the commemoration of the International AIDS Candlelight Memorial.

The Pampanga politiko, together with the Reproductive Health and Wellness Center (RHWC) and the Angeles City AIDS Council, remembered the people who died because of the disease.

The Department of Health said Central Luzon is third in the country with the highest reported cases of HIV cases.

“The candle lighting ceremony symbolizes hope for persons afflicted with HIV that a cure will be discovered in the near future. In the meantime, the government is offering a comprehensive program intended for people living with it to delay its progression to AIDS,” Pamintuan said.

Politiko would love to hear your views on this...
Post Views: 0
Spread the love
Tags: AIDS victims, Angeles City, Mayor Ed Pamintuan
Disclaimer:
The comments posted on this site do not necessarily represent or reflect the views of management and owner of POLITICS.com.ph. We reserve the right to exclude comments that we deem to be inconsistent with our editorial standards.