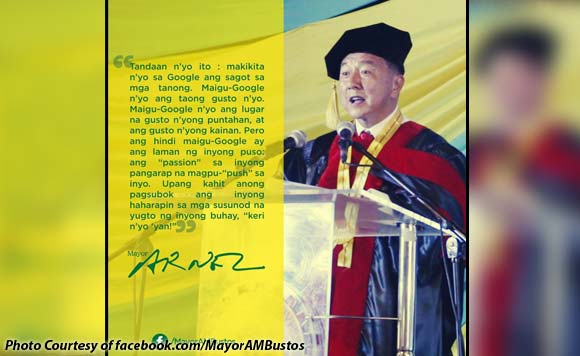 Bustos Mayor Arnel Mendoza knows how important the role Google plays nowadays in the life of student. But the politiko shared during a recent graduation ceremony that it won’t always be a source for wisdom.

Mendoza gave the keynote speech during the commencement exercises at the Bulacan State University – Bustos Campus.

In his speech, Mendoza first acknowledged how Google can answer many things. Then he shared the one thing it won’t be able to teach the grads.

Politiko would love to hear your views on this...
Post Views: 0
Spread the love
Tags: Bulacan State University, Bustos Campus., Bustos Mayor Arnel Mendoza, Google
Disclaimer:
The comments posted on this site do not necessarily represent or reflect the views of management and owner of POLITICS.com.ph. We reserve the right to exclude comments that we deem to be inconsistent with our editorial standards.