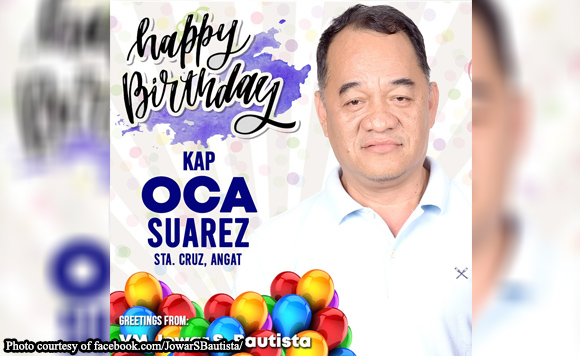 Angat Bulacan Vice Mayor Jowar Bautista took to Facebook to honor one of the most loyal and reliable barangay captains of Angat: Oscar Suarez of Barangay Sta. Cruz.

It was Captain Suarez’ birthday yesterday and people showered him with love. Vice Mayor Bautista wrote that his concern and service for Angat has been forever carved in people’s hearts and has been an inspiration for other public officials.

The vice mayor said that he believes the Lord will bless Captain Suarez more because he deserves it.

Politiko would love to hear your views on this...
Spread the love
Tags: barangay captain, Mayor Jowar Bautista, showers, sweetest words
Disclaimer:
The comments posted on this site do not necessarily represent or reflect the views of management and owner of POLITICS.com.ph. We reserve the right to exclude comments that we deem to be inconsistent with our editorial standards.