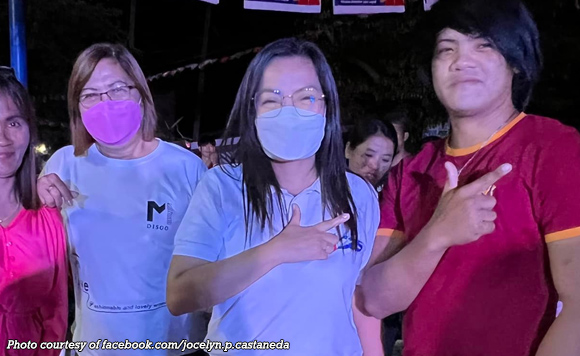 In a series of videos on facebook, Mariveles Mayor Jocelyn Castaneda called the attention of Philippine National Police and the Commission on Electiona to investigate the “talamak na vote buying” in her municipality.

The politiko even posted some videos as proof of her allegations.

VOTE BUYING ACTIVITIES ARE ALREADY STARTING IN MARIVELES, BATAAN. PLEASE IMPLEMENT WHAT IS BEING PROVIDED IN THE OMNIBUS ELECTION CODE CONCERNING ILLEGAL ACTIVITIES DURING ELECTION PERIOD!

Sec. 261. Prohibited Acts – The following shall be guilty of an election offense:

Any person who gives, offers or promises money or anything of value, gives or promises any office or employment, franchise or grant, public or private, or makes or offers to make an expenditure, directly or indirectly, or cause an expenditure to be made to any person, association, corporation, entity, or community in order to induce anyone or the public in general to vote for or against any candidate or withhold his vote in the election, or to vote for or against any aspirant for the nomination or choice of a candidate in a convention or similar selection process of a political party.

Any person, association, corporation, group or community who solicits or receives, directly or indirectly, any expenditure or promise of any office or employment, public or private, for any of the foregoing considerations.

Politiko would love to hear your views on this...
Spread the love
Tags: Mariveles, Mayor Jocelyn Castaneda
Disclaimer:
The comments posted on this site do not necessarily represent or reflect the views of management and owner of POLITICS.com.ph. We reserve the right to exclude comments that we deem to be inconsistent with our editorial standards.