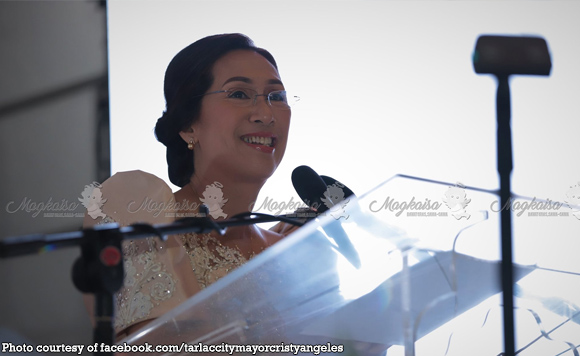 Tarlac City Mayor Cristy Angeles was recently filled with a whirl of emotions.

After delivering her 2019 State of the City Address, the first lady mayor of Tarlac City took to Facebook to extend her gratitude further. She thanked her fellow Tarlaqueños who supported her “1,198 days of good governance.” She also happily announced that the Department of Interior and Local Government (DILG) has finally given the city the Conferment of the Seal of Good Local Governance. Mayor Angeles also took pride in the infrastructure projects she initiated, the investments the city welcomed under her administration, and the fiscal management she operated.

Her “honest and caring leadership” would not have been possible without the help of many public and private agencies as well as generous individuals who have supported her since Day One.
link:

Politiko would love to hear your views on this...
Spread the love
Tags: 2019 State of the City Address, Department of Interior and Local Government), Mayor Cristy Angeles, Tarlac City
Disclaimer:
The comments posted on this site do not necessarily represent or reflect the views of management and owner of POLITICS.com.ph. We reserve the right to exclude comments that we deem to be inconsistent with our editorial standards.