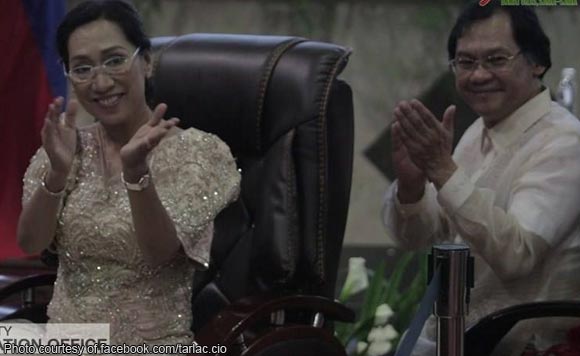 Mayor Cristy Angeles and Vice Mayor Aro Mendoza of Tarlac City are seeking a reelection in next year’s polls.

Angeles and Mendoza led the filing of their team’s candidacy on Wednesday morning at the Commission on Elections local office, flanked by numerous supporters.

Angeles, 58, is a first-termer mayor of Tarlac City. She was a Board Member of Tarlac province in 2013-2016, her first entry into the political world.

The lady politiko has a degree in Commerce from the University of Sto. Tomas, and is a skilled literary writer.

Angeles is married to Victor Angeles and they have four children.

Politiko would love to hear your views on this...
Spread the love
Tags: Commission on Elections, Mayor Cristy Angeles, Tarlac City, Tarlac province., University of Sto. Tomas, Vice Mayor Aro Mendoza
Disclaimer:
The comments posted on this site do not necessarily represent or reflect the views of management and owner of POLITICS.com.ph. We reserve the right to exclude comments that we deem to be inconsistent with our editorial standards.