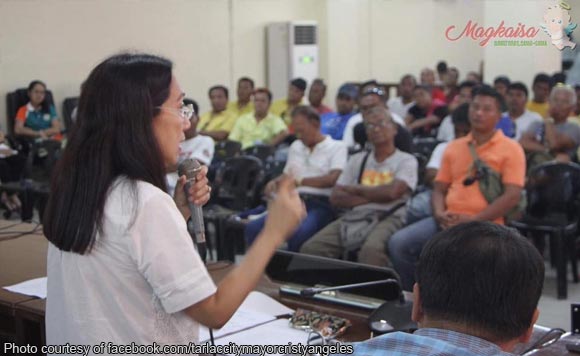 Tarlac City Mayor Cristy Angeles on Monday (May 30) urged tricycle drivers and operators to work together to ease the city’s traffic problem.

The Tarlac politiko hosted 103 of the city’s 117 Tricycle Operators and Drivers Associations (TODA) in a public forum on the city government’s traffic management programs.

Angeles said that without the cooperation of the TODAs implementing reforms in the transport sector will be difficult.

She also said that despite initial objections to the city government’s experimental traffic schemes, traffic in the city center has improved

Angeles promised to open alternate routes in the coming years to further ease the traffic congestion problem in Tarlac City.#

Politiko would love to hear your views on this...
Spread the love
Tags: city's traffic problem., Tarlac City Mayor Cristy Angeles, Tricycle Operators and Drivers Associations
Disclaimer:
The comments posted on this site do not necessarily represent or reflect the views of management and owner of POLITICS.com.ph. We reserve the right to exclude comments that we deem to be inconsistent with our editorial standards.