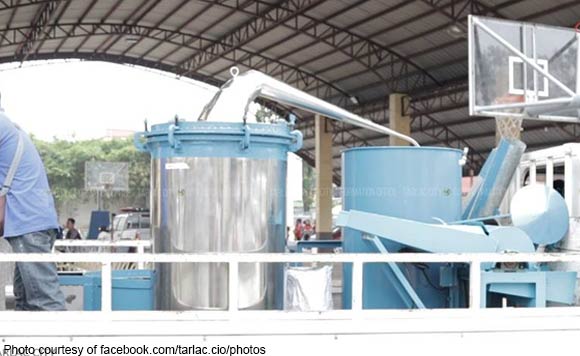 The city government will put up the first citronella oil production center in the province to provide livelihood opportunities to marginalized residents.

Mayor Cristy Angeles said the clearing and land preparation for the site of the project in Barangay Baras-baras here is now being undertaken by the Special Projects Management Unit.

“We are now on the second phase of the project which involves the use of an oil extraction machine and other equipment for the production of citronella oil,” Angeles said.

She said the first phase of the project, which has already been completed, involved the planting of citronella grass in all of the city’s 88 public elementary schools.

The mayor also said the project is a tripartite undertaking of the Tarlac city government, the Department of Education (DepEd) and the Kaisa Women’s Organization (KWO).

The public elementary schools in the city produce the citronella grass, while the city government of Tarlac processes the plant into oil.

The Kaisa Women’s Organization, on the other hand, uses the oil as an ingredient in various cleaning products, such as massage oil, fabric conditioner, dishwashing liquid, among others, which are being sold to customers and the markets.

“The project aims to promote the livelihood possibilities of the citronella plant as well as its usefulness in the prevention of mosquito-transmitted diseases such as dengue and Zika virus,” she said.

The citronella grass, widely used as an ingredient in aromatic products such as soaps, candles, potpourri, lotions and essential oils used for aromatherapy, is a plant that proliferates easily in any climate or soil type and can thus be easily cultivated even by non-horticulturists or untrained individuals, like schoolchildren and school teachers. (PNA)

Politiko would love to hear your views on this...
Spread the love
Tags: Barangay Baras-baras, Department of Education (DepEd), Kaisa Women’s Organization (KWO), livelihood, Mayor Cristy Angeles, Special Projects Management Unit, Tarlac City
Disclaimer:
The comments posted on this site do not necessarily represent or reflect the views of management and owner of POLITICS.com.ph. We reserve the right to exclude comments that we deem to be inconsistent with our editorial standards.