May natuwa, may nagalit: 20,000 join Mayor del Rosario in coastal clean-up in Bataan 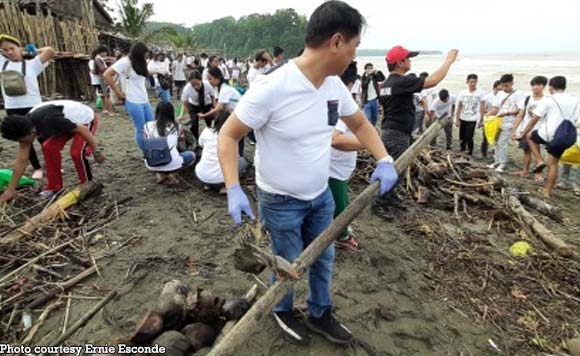 BAGAC, Bataan — Some 20,000 people joined the International Clean-up Day, focusing not only on the seven coastal villages but all the 14 barangays of this town.

Mayor Rommel del Rosario said some 8,000 participated in the parade from the Philippine–Japan Friendship Tower to the town plaza and later in the clean-up of seven seaside villages adjacent to the West Philippine Sea.

He said that while they were cleaning wastes in the coastal villages, others, numbering to some 12,000, were cleaning their respective barangays.

Municipal administrator Nick Ancheta said this was the biggest gathering in the observance of the International Cleanup Day in the province. “Nakakagulat ang dami ng tao (The huge number of people is overwhelming),” he said.

She said the activity started with the long parade and later the launching of the “One Bagac for Zero Plastic” or 140 where Mayor Del Rosario, environment officials, and ordinary citizens symbolically placed plastic bottles inside a big fish bin.

Pillagara said that if the country has 911 for its hotline, 140 will serve as such for Bagac.

The mayor led a big group in the clean-up of the shores of Barangay Pag-asa where beach resorts frequented by tourists are located.

He said that the Sangguniang Panlalawigan has passed an ordinance that will impose a penalty on violators.

He said that houses used to line up in the coastal area but that he ordered the demolition of structures 20 meters from the highest tide.

He added he will also ask houses and beach resorts to install septic tanks approved by the Department of Environment and Natural Resources (DENR) so that water going to the sea will be clean.

The mayor said Bagac will also be a no-smoking area. A chain smoker, he said that he has already begun to stop smoking.

He said that their campaign just started but will not only be good for a day but a continuing process. “I will implement what the ordinance indicates. This is for the next generation, for the children of your children. Let us help one another,” he told villagers in Tagalog.
(PNA)

Politiko would love to hear your views on this...
Spread the love
Tags: (The huge number of people is overwhelming, Bagac, Bureau of Fire Protection, International Clean-up Day, Philippine Coast Guard, Philippine National Police, Rommel del Rosario
Disclaimer:
The comments posted on this site do not necessarily represent or reflect the views of management and owner of POLITICS.com.ph. We reserve the right to exclude comments that we deem to be inconsistent with our editorial standards.